Top news story: There were two headlines this week.

First, the Americans intercepted tankers carrying Iranian products bound for Venezuela. In theory, this could occur as part of a conventional sanctions policy. However, with the possible dissolution of the WTO, this case becomes crucial, as it illustrates the breakdown of both international trade relations and ownership.

Second, Russia announced the first vaccine against coronavirus. As was to be expected, an active public relations campaign was launched by potential competitors (the US immediately announced that the use of this vaccine would be banned in the country), but the main thing is the psychological reaction of the markets to the announcement, which turned out to be very positive.

Eurozone GDP confirmed -12,1% per quarter and -15,0% per year - historical minimums for 25 years of observation:

Russia’s GDP in Q2 fell by 8,5%. Alternative estimates give about minus 20%, but this will be adjusted by recovery growth. It is likely that Federal State Statistic Service cites the data already with this potential growth so as not to worry the public.

Industrial production in China stood at 4.8% per year (lower than it was before the quarantine and worse than analysts' current expectations), further growth stalled:

Housing prices in 70 PRC cities slowed annual growth to 4,8%, the lowest in 16 months.

Industrial production in Britain is recovering, but annual rates remain strongly negative (by 12.5%), with declines already from 2018/19, i.e. well before the COVID-19 pandemic. Same in the manufacturing sector.

In the Euro Area, a very similar picture:

In the United States, the monthly growth of industrial production declined to +3,0%, while the annual decline is still strong (-8,2%).

In New Zealand, business confidence started to deteriorate again in August. The same is true in Australia:

After a downturn in July, American consumer optimism improved weakly: 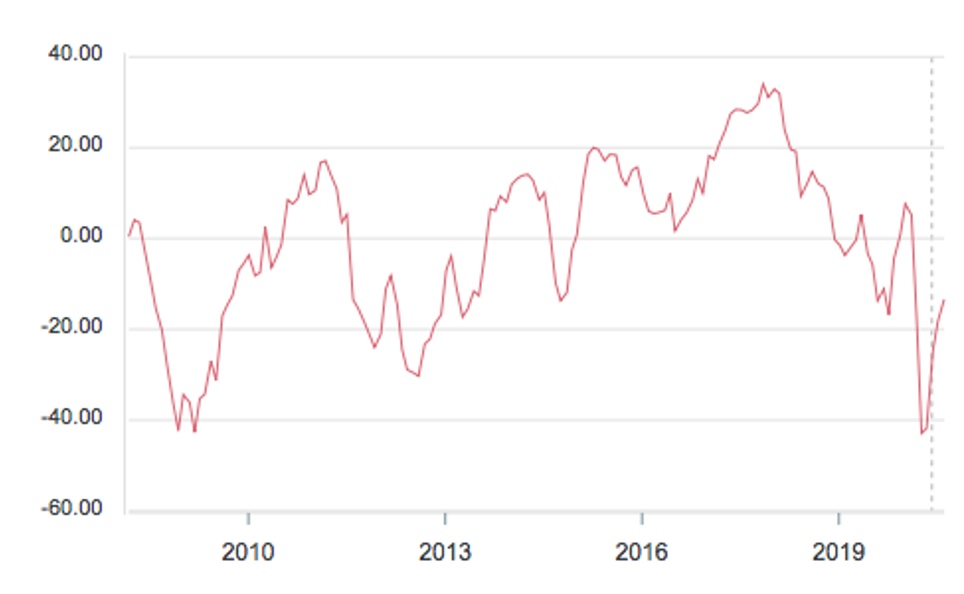 Japanese consumers' market sentiments improved slightly, but remained in a recession, where they had gone in late 2017; expectations began to worsen again:

Deflation in Italy is strongest in 4 years, and near historical minimums in 58 years; the same for Germany:

The US CPI jumped 0,6% per month for the second time - twice as much as expected - and for the second time reached its highest value in 11 years. Excluding food and fuel, it’s also 0,6% - three times the forecast and record since January 1991 (Gulf War), and since January 1984. Not surprisingly, inflation expectations in the US are at a six-year peak:

Unemployment in Britain suddenly started to rise again in July, and wages fell 1,2% a year - worse only in April 2009.

The Central Bank of New Zealand kept the rate at a record low of 0,25% and expanded the asset purchase program.

Summary. We proceed from the model of the crisis described in the book «Memories of the Future» and therefore we must recognize that the recovery from the quarantine collapse is gradually ending. It is being replaced by a permanent structural decline.

Probably, there will be another small jump in the early autumn, but various political upheavals (US elections), geopolitical conflicts (the US and China in the first place) and objective economic problems will not compensate for the spring’s losses – global economic restructuring is possible only if the overall structural imbalances are compensated.