The collapse of the world dollar system

Top news story: The key economic event of the week was categorical claims to China’s «TikTok» short video service, which became the most popular among American youth. If Trump’s accusations are later forgotten, then the demand to immediately sell this service to an American company effectively nullifies the settlement of the US-China relationship. Many experts, including some in the big business community, had hoped for this settlement, even if Trump lost the election. The collapse of the global dollar system is becoming almost inevitable and the resulting deterioration in market sentiment will affect financial markets this fall.

Germany factory orders surged by a record 27,9% per month in June, but remained in the negative by 11,3% per year; and since August 2018, annual performance has been positive only once, in February 2020.

The same picture in industrial production in Germany: 8,9% per month, but -11,7% per year, and after 2018 the only approach to very small annual positive values: 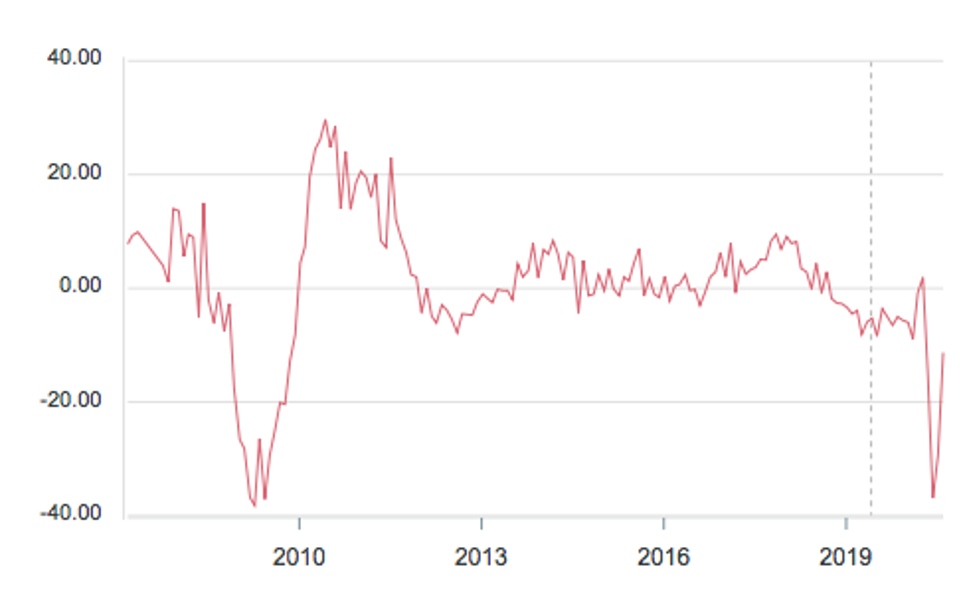 Construction spending in the United States in June showed negative values for the fourth consecutive month:

Manufacturing PMIs in most countries reached growth in July:

In the Euro Area:

In Britain and the USA:

With the exception of Japan, which is already in recession for the 15th month, and South Korea, where growth actually took place only 2 years ago.

Likewise, in Russia, where employment continues to decline:

A similar picture in the service sector, but the decline was greater than in production, so the increase was stronger. This is the case in China:

In the Euro Area, in Britain, in Russia (but employment is falling here) and in the US (where it is not yet possible to cross 50 points):

In Japan, the recession is still there:

In the US, the IBD / TIPP Economic Optimism Index hardly improves (pessimism prevails for five months):

In the US (according to the Challenger survey), there was a sudden increase in layoffs in July:

The number of jobs increased in July, but was three times slower than in June:

And the unemployment rate remains above 10% even according to official data (the reliability of which we spoke about in one of the previous reviews):

The annual salaries of the Japanese are negative, and their spending remains negative for 9 months despite the decrease in the scale of the recession:

Indonesia’s inflation in July was the weakest in more than 20 years:

Excluding food and fuel, inflation is at record lows and the annual growth of loans in Indonesia in June is the weakest since 2002.

In France, the fiscal deficit is close to the record - but the country’s budget is negative for all 26 years of observation without a single month of exclusion:

A similar situation is in the UK, where the Bank of England has collapsed local financial markets by publishing its GDP forecast for 2020 (-9,5%, a record low since 1921).

The Central Bank of Brazil cut the rate to a new all-time low of 2%.

Summary. Recovery is taking place, but policy actions suggest that the authorities have already lost confidence in a full recovery this fall. This is also the view of some prominent experts. However, most citizens believe in the fall recovery. However, no one knows the real causes of the events, and certainly no one has their mathematical models - only the Mikhail Khazin Foundation has them. So far, the situation has been stabilized by massive injections from central banks, but after the US elections (and possibly before them) the negative consequences of these methods will become apparent.